Highlights from Past Events/Activities

2014:
Club 90th Anniversary Lunch
D.A.R.C’s 90th Anniversary Lunch @ The Old Dutch Club.
Louie- ZS5LP gave the Welcome and an overview of the DARC’s achievements over the last 90 years , after which a 3 course lunch was enjoyed by all the guests. A special Vote of thanks go to the Chairman , Louie ZS5LP for arranging the Venue and the Catering  and to ZS5SS for providing the Audio Equipment for the event

This annual amateur radio event was started in Scotland by John Forsyth, GM4OOU, and the late Mike Dalrymple (GM4SUC), both members of Ayr Amateur Radio Group (AARG). Through the years the event has grown probably  far beyond what was envisaged for it. The event evolved from the Scottish Northern Lighthouses Award Weekend; a biennial event which was first held in  1993 and became the ILLW in 1998. Over the years it has continued to grow and to date more than 450 Lighthouses  and Lightships in some 50 countries around the world are participating in the event each year.

The event is usually held on the 3rd full weekend in August starting at 0001 UTC on Saturday and finishing at 2359  UTC on Sunday. It also coincides with the International Lighthouse Heritage Weekend an event organised by the  Association of Lighthouse Keepers whereby many world lighthouses are open to the public for either the Saturday,  Sunday or the whole weekend with tours, entertainment and functions for visitors.
The basic objective of the event is to promote public awareness of Lighthouses and Lightships and their need for  preservation and restoration, and at the same time to promote amateur radio and to foster International goodwill.  Lighthouses are fast becoming an endangered species with the introduction of Global Positioning Systems (GPS) and  Satellite Navigation (SatNav). Furthermore the automation of the light source to solar power has resulted in the  withdrawal of management personnel (Keepers).  Now in it’s 18th year, the ILLW has over 200 entries for this years event that took place on the 14th and 15th  August.

Since 1998, the event has become a big hit with portable operators. More than 450 lighthouses and Lightships in  over 50 countries around the world are participating in the event this year

D.A.R.C operating as ZS5D activated the Cooper lighthouse to celebrate the International lighthouse weekend on the  14/15 August 2015.
This was done on an open spot in the Wentworth Hospital grounds, QRV was from about 10:00 onwards on 40M – 7070Khz LSB.
The final tally for the day:  17 participants with 82 contacts in a few hours and loads of fun 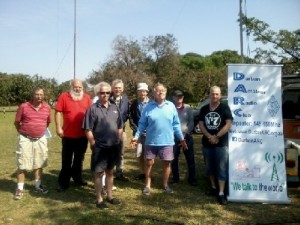